There is never a shortage of jazz fundraisers going on, but this one is for one of the best in the business. Clark Terry is now home, but ended up having to have both legs removed during his time in the hospital. You can read up on his condition here, and leave him a note here. The press release about the event is below.

Over 30 musicians will perform for their colleague, Clark Terry, to raise funds to help defray Clark’s medical expenses. Clark Terry plans to appear at the event via Skype.

Suggested donation is $25 at the door.

Checks should be written to Jazz Foundation of America with “Clark Terry account” in the memo line.

Clark Terry’s career in jazz spans more than seventy years. He is a world-class trumpeter, flugelhornist, educator, composer, writer, trumpet/flugelhorn designer, teacher and NEA Jazz Master. He has performed for eight U.S. Presidents, and was a Jazz Ambassador for State Department tours in the Middle East and Africa. More than fifty jazz festivals have featured him at sea and on land in all seven continents. Many have been named in his honor.

He is one of the most recorded musicians in the history of jazz, with more than nine-hundred recordings. Clark’s discography reads like a “Who’s Who in Jazz,” with personnel that include greats such as Quincy Jones, Ella Fitzgerald, Oscar Peterson, Dizzy Gillespie, Dinah Washington, Ben Webster, Aretha Franklin, and the list goes on.

He broke the color barrier by accepting an offer in 1960 from the National Broadcasting Company to become its first African American staff musician. He was with NBC for twelve years as one of the spotlighted musicians in the Tonight Show band. During that time, he scored a smash hit as a singer with his irrepressible “Mumbles.”

Clark has received dozens of other Hall and Wall of Fame Awards, NEA Jazz Master Award in 1991, keys to cities, lifetime achievement awards (four were presented to him in 2010), trophies, plaques and other prestigious awards. The French and Austrian Governments presented him with their esteemed Arts and Letters Awards, and he was knighted in Germany.

His long-awaited book – Clark: The Autobiography of Clark Terry– is available now, published by University of California Press. 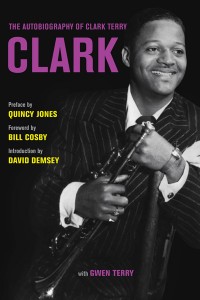 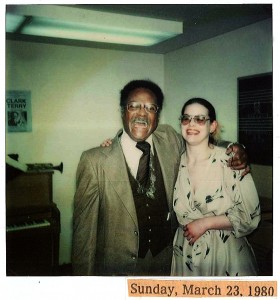 I could not think of a living jazz musician more deserving of a documentary about him or herself than the great Clark Terry.

It was a true high point in my career when I had the opportunity to interview Clark Terry a couple of years back, hearing about what it was like to instruct Miles Davis, play with both Duke Ellington and Count Basie, and to hear him perform “Mumbles” a few feet in from of my face.

Now, his influence and inspiration will be brought to the screen in a documentary called “Keep on Keepin’ On”.

The film primarily focuses on Terry’s influence on two musicians: the co-producer of the film (and drummer) Alan Hicks, and blind pianist Justin Kauflin, both in their twenties.

Terry, who is 90, maintains the same intensity and straight talk with these two students as he might have with former students like Quincy Jones and Miles Davis. The phrase “Keep on Keepin’ On” is a phrase that Terry has used for over 70 years in an effort to motivate and inspire students.

The filmmakers have been attempting to fund the film out of pocket, but have also incorporated donations through Kickstarter, a unique participatory funding resource that allows individuals to contribute to the project. Depending on how much individuals might give, donors can receive a variety of Clark Terry memorabilia. Donations are being accepted through August 8th.

The film also follows Terry as he works on his autobiography, due for release in October.

Congratulations to Clark Terry, not only one of the few remaining living legends of jazz, but someone who has spent so much time educating and mentoring others in the art.

Remembering Duke Ellington on his 110th Birthday with Clark Terry

Happy birthday to one of the greatest jazz trumpeters ever, and a musician who inspired me personally as a trumpet player.

CLICK HERE to listen to my interview with Clark Terry from 2007, which includes him playing his famous “Mumbles”.

Also, CLICK HERE to leave a happy birthday message on his blog.

Is there a jazz musician alive today that deserves the Lifetime Achievement award more than Clark Terry? I’m happy to see that he was recognized for that award this year at the Grammy Awards, along with Bobby Darin, Michael Jackson, David “Honeyboy” Edwards, Loretta Lynn and Andre Previn. Clark was quoted as saying at the ceremony “I’m going to keep doing it until I get it right”. Congrats to one of my trumpet heroes, and the man that still possesses the happiest sound in jazz.