As we head into the new year, I decided to take a look back at some of the things I saw dominate discussion as it relates to jazz over the last year, and I must say, I have no issue with many of them never being discussed again. 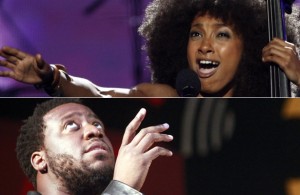 I know that the topic of finding a way to revitalize the commercial success and popularity of jazz is certainly nothing new. However in 2012, it seemed that many found it necessary to anoint two musicians as saviors for jazz in the mainstream. Bassist/vocalist Esperanza Spalding beat out pop child Justin Bieber for the 2011 Grammy for Best New Artist (much to the chagrin of 9 year old girls everywhere), and keyboardist Robert Glasper made a musical appearance on David Letterman. Following this, jazz bloggers and writers seemed to suggest that these two young musicians could attract the attention of more than just hardcore jazzheads, and in turn it would/could result in an increase in record sales, concert attendance, and overall acclaim for the jazz industry.

There are so many different things I want to say about this that I hardly even know where to start, but I will try my best.

For starters, I vaguely remember the same sort of suggestions being made when Norah Jones exploded on to the scene with her mega-hit Blue Note album Come Away With Me. I also remember the Herbie Hancock album River: The Joni Letters  winning the 2008 Grammy for Album of the Year, only the second jazz album ever to receive that honor, and writers suggesting that this would launch jazz back into the mainstream.

The recognition that Norah Jones and Herbie Hancock received benefited two musicians: Norah Jones and Herbie Hancock. I have yet to see any evidence that those who ended up purchasing their albums or hearing their music all of a sudden made a huge genre switch in their listening patterns, or sought out other musicians from the jazz genre. In fact (and I have no evidence to support this, only a very strong gut feeling), I would be willing to bet that if you took a poll of 100 jazz musicians, 99 of them would say, without hesitation, that the attention Norah and Herbie received did literally nothing to increase the work or sales for the rest of the musicians in the jazz industry.

Now, somehow, Spalding and Glasper are the fresh faces, and once again, writers are holding them up on high. These two musicians appealed to the mainstream because they produced music with crossover appeal (not to mention that they are young, attractive, and hip). Many jazz musicians (in fact, I would say the majority), either have no interest in producing “crossover” music that appeals to those that might not particularly be attracted to mainstream jazz, or have struggled for years to find out exactly how to create that appealing crossover sound.

What we need to do is be honest. People that have listened to rap, rock and country don’t just wake up one day and decide that today is the day they start listening to jazz. And there isn’t a young, attractive crossover musician that can appear on a late night talk show that will make them do that. While I share the concern with others about jazz radio stations disappearing, record labels dropping their jazz musicians, and jazz musicians in general struggling to get work, trying to attract people through Esperanza and Glasper is not the way to go.

There is no magic bean to make jazz commercially successful again. Those who are going to enjoy it will enjoy it, and those who wont enjoy it wont. But if that is your concern, bloggers, writers, and critics, then there are a few things you can always do to help.

For starters, try taking a friend (or six) to a show. And then another show, and then another show. These shows can be cheap, yet you kill two birds with one stone. You are still financially supporting these musicians with your cover charge, and you are exposing others to their music. Try purchasing albums (especially by jazz musicians who are still living) rather than having your jazz collection be made up entirely of records sent to you for free by labels for review or airplay.

Regardless, I would love this year for writers to be more focused on good, quality music rather than discussions on what pretty face is going to save jazz this year.

On a different note…

I was more or less over reading the writings and Twitter posts of Nicholas Payton, but I was way more over reading the thoughts and responses to Nicholas Payton by everybody else. I may not care for or agree with all of the stuff Payton wrote over the last year, but it is crazy how much people tried to analyze it dissect it. The worst part about it was people deciding on their own exactly why he was writing it. Who cares? Maybe his is mad, maybe he isn’t. But with all the crap that people write on the internet, why does a trumpeter get so much attention and is so scrutinized for it? Politicians and professional athletes barely have their “controversial” public thoughts and comments gone over with such a fine tooth comb.

I will say that one of the best things that Payton wrote this last year was An Open Letter to Branford Marsalis. I didn’t just like this post because he took Branford to task, but because he supported his ideas academically. His arguments were well thought out, his tone was calm, and he used great quotes to support his opinion. Whether you agree with a person or not, this is a great example of how someone should present their side in an argument. Just like in any real life debate, people respond much better to logic and facts rather than anger and yelling.

There are plenty of other things for me to rant about (like how I am convinced that one major jazz blogger is insistent on creating a “best of” list at the end of each year, this year no exception, filled with albums based on how obscure they are rather than if he really enjoys them). Instead, rather than focusing even more on the things I didn’t like about the jazz world from last year, I’m going to open up a new CD and focus on enjoying the jazz world more this year. Hopefully this year we can all focus less on the politics of the music, and focus more on the music itself.

2 Replies to “Resolutions for jazz in the new year”