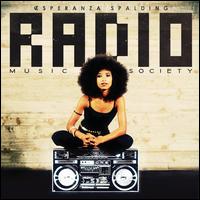 There is no doubt that Esperanza Spalding is riding a high. Last year she became the  first jazz musician to ever win the Grammy Award for Best New Artist (sorry, Justin Bieber). Her last album, Chamber Music Society, peaked at number one on the Billboard jazz charts.

So, her popularity is at an all-time high, and the Portland-raised bassist and vocalist seems ready to take her talents to the next level.

There was no shortage of hard work that went into this album. The compositions and arrangements are certainly creative and thoughtful, and Spalding reminds us that she is one hell of a bass player on both electric and acoustic.

But from the opening track, Radio Song, throughout the finish, I am left needing more. Songs like Radio Song and the Stevie Wonder tune I Can’t Help It are arranged to supply a deep groove, but the grooves that you want, that you could drive a car into, simply aren’t deep enough.

While I felt that in previous albums that Spalding’s voice was  presented like an instrument that was part of the group, here it most certainly takes the lead. And once again, there is no lack of effort or creativity when it comes to her singing. However this may be a case where too much effort and creativity could likely be the problem. The songwriting is average at best, but perhaps seemingly due to trying too hard.

Take out the vocals?

Complex is not always better, and one mistake that can easily be made is to think that the listener cares more about ability and complexity than the simple ability to understand what is being sung and if it sounds enjoyable or memorable. Spalding’s lyrics put to the Wayne Shorter song Endangered Species might be a good example of this.

I remember an established vocalist telling me that a truly talented vocalist best communicates the song they are singing by making the song personal and expressing that emotion through their voice. If the lyrics in the songs on Radio Music Society are personal to Spalding, that gets lost in translation to the listener. I would love to hear an all-instrumental album from Spalding, or at least something with minimal vocals where she can further explore her wonderful talents on the bass.

Following the Grammy win last year, and the minimal odds that a record company would agree to that, we likely wont see that any time soon.