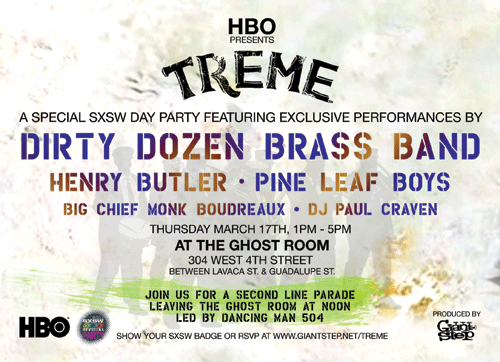 I am a big fan of the HBO show Treme, and the party that they are going to be throwing at South By Southwest in Austin this year to kick off their second season looks like a lot of fun.

The event, starting at noon on Thursday, March 17th, will celebrate the April 24th Season Premiere of the critically acclaimed series (airing Sundays at 10 pm with same-night encores at midnight). The complete first season will be available on DVD on March 29th.

The party kicks off in front of The Ghost Room at noon as musicians, including the Dirty Dozen Brass Band, come together for a second line led by Dancingman504. The quintessential New Orleans art form will weave down to Sixth Street as SXSW revelers join in the fun. The party then moves inside for exclusive performances by legendary New Orleans and Cajun artists including the evening’s headliner the Dirty Dozen Brass Band as well as Pine Leaf Boys, Henry Butler and Big Chief Monk Boudreaux with DJ Paul Craven spinning throughout. Guests will get an exclusive look at the second season of Treme as they enjoy Cajun food provided by Austin’s own Evangeline Café.