From the United States Postal Service 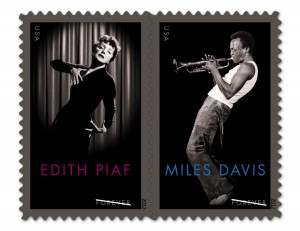 Next Tuesday (June 12,2012), the U.S. Postal Service is partnering with La Poste of France to celebrate the musical talents of Edith Piaf and Miles Davis with the Miles Davis/Edith Piaf (Forever®) stamps.

Music speaks an international language and these stamps celebrate a lively conversation between the U.S. and France. Edith Piaf (1915-1963) is one of the few French popular singers to become a household name in the U.S.; the great American jazz trumpeter Miles Davis (1926-1991) is beloved in France, where he performed frequently and was made a Chevalier in the Legion of Honor. He was also awarded the Grande Médaille de Vermeil by the city of Paris (the equivalent of making him an honorary citizen).

The stamp art captures Piaf in a dramatic pose, typical of her emotional performances. Standing on stage in her signature black dress, the waif-like singer, who stood less than five feet tall, moved audiences to tears with her soulful delivery. Davis epitomized “cool” style and was one of the most important musicians of his era; the stamp art depicts him in a kinetic performance pose, suggesting his extraordinary, charismatic intensity.

The Edith Piaf and Miles Davis stamps are being issued as Forever stamps, which are always equal in value to the current First-Class Mail one-ounce rate.