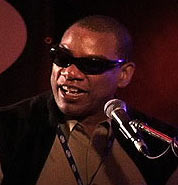 Most people know Henry Butler as a wonderful blues based pianist from New Orleans. I also knew that Butler happened to be a photographer as well, which many might find amazing, as Henry happens to be blind.

I had known this, and even seen some of his photographs, but I had never really figured out how he goes about his photography without the ability to see, until I recently read an article that Butler wrote for The Digital Journalist back in 2005 called The Eye of the Beholder.

In the article, Butler talks about being inspired by the empty feeling he would have after going to museums.

“After going to exhibits, hearing people describe photos and paintings, I felt kind of empty—- I wasn’t getting all that I could get. The best thing, I decided, was to try to become at least an artist who was doing something in one of the visual arts.”

So he chose photography. Butler started by taking a bunch of Polaroid pictures so that he could get an immediate response from a sighted audience. From there, Butler learned how to improve his shots based on what he could hear.

“When I take a picture, I listen to the voice, to sound, and try to realize how tall my subject is, relative to my height.”

Butler admits that he has had an assistant for his photography for several years, helping with details such as angle, distance, and background, but says that the final product needs to be something that is inspiring to him.

“It’s a delicate balance – she could see each image very differently. When Andrea says, “That’s a great shot” if don’t feel that image stimulates me, then I don’t want it. She doesn’t interfere with what I do unless I’m way off.”

” If the person is attuned, they might have a glimpse of what the photographer had in mind.”

8 Replies to “Henry Butler the photographer”