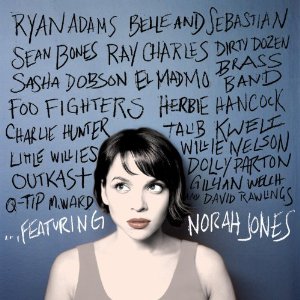 I have often said that Norah Jones is the most versatile vocalist since Ray Charles. There are many that disagree with me, for a variety of reasons, but very few of their arguments actually have to do with her versatility. Some will say she isn’t a true (insert genre here) singer, but that argument to me just goes to show that she can succeed at a variety of styles and sounds without having to be a jazz, folk, rock, country, or blues singer…thus making her very versatile. Was Ray a true country singer? Maybe not, but he did it, and people seemed to like it. And in the case of Norah Jones, you don’t sell nine million copies of your debut album without being able to appeal to a variety of audiences.

That versatility is on display in a new release that is due out November 16th called …Featuring Norah Jones.

This CD features 18 tracks of collaborations Norah Jones took part in between 2001-2010, and it couldn’t be with a more diverse lineup.

Country fans might enjoy her tracks with Dolly Parton or Willie Nelson. Jazz fans will like her work with Herbie Hancock, the Dirty Dozen Brass Band, Ray Charles, and Charlie Hunter. Pop/Rock fans will embrace songs with the Foo Fighters and Ryan Adams, and even rap and hip-hop fans will be surprised to hear her work with Outkast, Talib Kweli, and Q-Tip.

For the open-minded music fan, this album is absolutely wonderful. For the hardcore Norah Jones fan, this is a must-have. Not only does she cross over into a variety of different musical worlds, but she does it well. There are no second rate performances here. By my count, three of the pairings on this album resulted in Grammy Awards (Outkast, Herbie Hancock, and Ray Charles).

There are plenty who will not enjoy this album, and those who don’t are likely the same group that has a problem with Norah not being a specific genre purist. But for the rest of us, this album is highly recommended.