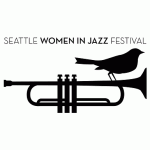 The Seattle Women in Jazz Festival, the first festival of its kind locally, will highlight some of Seattle’s best jazz bands, led and/or comprised of women. The festival will also work to engage youth in the art of jazz and to reach out to potential audience members who may not have previously attended a jazz concert.

The festival also recently announced the winner of the Red Holloway Memorial Scholarship to Eliana Colachis Glass, a 15-year-old Freshman at Roosevelt High School, who is taking lessons in voice, piano, and guitar! She will be taking a vocal summit and stage performance workshop at Berklee School of Music in Boston, this summer. Elaina will be recognized and will perform at 4 PM PST at The Vera Project (Located on the corner of Warren & Republican Ave. N., next to the Key Arena, at the Seattle Center) on Sunday April 28th.

For more information on the Seattle Women in Jazz Festival, visit their website here.

Perhaps singer Melody Gardot has already emerged, but I feel that it is safe to say that while her popularity has risen quickly, Melody is still in the early stages of what will be a long, wonderful career.

What is most interesting, and truly inspiring, is the story of how twenty-four year old Melody Gardot came to be a singer and songwriter.

Melody was 19 at the time of the accident. She was in fashion school, and played piano at a handful of nightclubs in the Philadelphia area. She was riding her bicycle when a car took a turn and hit Melody, fracturing her pelvis and skull, among other injuries.

It was music that she held to for inspiration during the several months she spent in the hospital, and through rehabilitation. She stayed positive writing music and singing, and even recording from her hospital bed.

Life since leaving the hospital has not necessarily been easy. Melody is extremely sensitive to light and sound, and is prone to headaches. She is forced to wear dark glasses, and requires the assistance of a cane to walk.

Even with the great pain she deals with on a daily basis, and the fact that loud noise can only enhance that pain, Gardot continues to take her music career to the next level. Following a wonderful debut release Worrisome Heart, her new album My One and Only Thrill has peaked at number two on the jazz charts. With the exception of Over the Rainbow, the album is made up entirely original compositions, and offers a mellow, laid-back feel to compliment her warm, smokey tone.

I’m never one to suggest that anyone buy an album or listen to a musician out of sympathy, or the story behind the musician…so I wont. The music itself is worth the purchase. But to know not only what a person went through, but what she goes through on a daily basis while still managing to produce such wonderful music only heightens my appreciation for what one musician can do.

Other blog entries from the Emerging Artist Series

No, not that Grace Kelly.

I’m torn to define saxophonist, singer, songwriter, composer, and arranger Grace Kelly as “emerging”, considering what she has already accomplished. But as Grace celebrates her 17th birthday next Friday (that’s right, she is just 16), one must assume that there is plenty of opportunity in years to come for this young lady to become a household name in jazz.

On his radio program Jazz After Hours this morning, host Jim Wilke suggested that “young” and “talented” can often go hand in hand, and that no one would argue that both can easily be applied to Grace Kelly. After hearing her wonderful recording of Comes Love, it was easy to agree. And, as her website boasts, I am far from the only person to agree.

Kelly, at age 16, has already performed or recorded with Wynton Marsalis, Dave Brubeck, Harry Connick, Jr., Diane Reeves, Phil Woods, Hank Jones, Kenny Barron, Russell Malone, Cedar Walton, Peter Bernstein, and Marian McPartland. That is the very short list. She has also performed at Carnegie Hall, Birdland, and Scullers (another short list), as well as a variety of jazz festivals. She has won numerous young musician and student musician awards, and was named Best Jazz Act in Boston in 2008 by the FNX/Phoenix Best Music Poll. Oh, and she began her first term at Berklee College of Music last fall, on a full ride, again at age 16.

When you hear Grace Kelly play, or listen to one of her arrangements or compositions, you realize that this isn’t one of those situations where a musician will get cut slack simply based on the fact that they are young. Kelly needs no slack to be cut for her, and the attention that she has received and will continue to receive is more than worthy. Her performances and compositions are frighteningly mature and well designed. In fact, the only way you are even aware that the player is a 16 year old is if you are told that.

What is more surprising is that Grace isn’t someone who had a sax shoved in her hands at age two. She, like many of us, took piano lessons as a young kid. She also followed the typical chronological time line that most kids do in school, not really playing the sax until she was ten. Two years later, she was impressing the likes of Ann Hampton Callaway and Victor Lewis.

I am not someone who throws around the word “prodigy”, but there is not much way to avoid associating that word with Grace Kelly. To imagine what she has accomplished in six years is hard enough to believe. To actually hear it is even more unbelievable.

Groove Notes will periodically take a look at some “up and coming” jazz musicians who are making a splash on the scene in a series called Emerging Artists.

I will begin this series looking at a young trombonist who is making a significant showing on the New York jazz scene. Since moving there eight years ago, Ryan Keberle has proven he is the real deal, not only as a trombonist, but also as a composer and educator.

I was able to meet Ryan when we both attended school at Whitworth University in Spokane, Washington. While Whitworth is regularly noted as one of the best college jazz programs in the country, Ryan possessed the talent that would soon lead him to the Manhattan School of Music in New York, where he would study with master trombonist Steve Turre.

It was Turre, or his absence, that brought Keberle to my attention once again. I will call myself the occasional Saturday Night Live viewer, and when I do manage to see the show, I tend to pay attention to the house band led by saxophonist Lenny Pickett (former bandleader of Tower of Power). I typically notice Steve Turre holding the trombone, easily spotted with his long black beard and sturdy frame. During my most recent viewing of the program, it was clearly not Turre on trombone. The young musician holding the trombone had a much slimmer build, no beard, and a head of hair far less tame than that of Turre. Further examination revealed the musician as Ryan Keberle, and I was pleasantly surprised.

Upon researching what Keberle has done since his arrival in New York, being surprised to see him playing with one of the top television bands might be as unfair as defining him as “emerging”. He has, in fact, emerged, and while his name might not be household among jazz trombone fans, it is in my opinion simply a matter of time.

Keberle is doing what all young musicians need to do: work. In fact he is working a lot, performing as a member of roughly 15 New York based ensembles, including the Maria Schneider Orchestra. Additionally his website notes performances or recordings with Wynton Marsalis and the Lincoln Center Jazz Orchestra, Frank Wess, Jimmy Heath, Slide Hampton, Charles McPherson, the late Percy Heath, Teo Macero, Joe Lovano, Eric Reed, Ivan Lins, Jon Hendricks, Madeline Peyroux, and Alicia Keys among others, and is the regular trombonist for the broadway musical, “In the Heights”.

Keberle released his debut album, The Ryan Keberle Double Quartet, in April of 2007. The album was a very unique concept, virtually molding two quartets (quartet one consisting of trombone, piano, bass, and drums, and a second brass quartet of trumpet, french horn, trombone, and tuba) into one fantastic sounding group. Great reviews followed, including reviews from the New York Times and Inside Connection.

Keberle recently returned home to Spokane to perform once again with the Whitworth Jazz Ensemble I, this time however, as the featured guest artist. Previous featured guests have included the likes of Gene Harris, Randy Brecker, Eric Reed, and Nicholas Payton, just to name a few.

Additionally, Ryan was selected as one of ten finalists for the Thelonious Monk International Jazz Trombone Competition. He also plays a role in jazz education, as he began his tenure as a visiting professor in 2004 at City University’s Hunter College.

Things look bright for Ryan Keberle, and the future only looks bigger and brighter for a musician who’s talents and capabilities continue to grow.