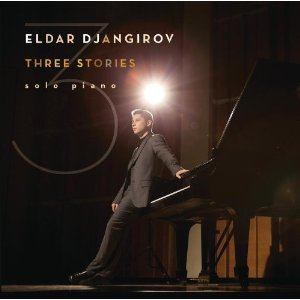 One thing I try to express on Groove Notes is that I don’t feel it necessary to post album reviews unless I feel there is an album really worth talking about.

Additionally, I hesitate to use the word “best”, because it suggests a certainty rather than leaving music to the personal taste of the listener.

In the case of the new album Three Stories by Eldar Djangirov, however, I do find it more than worth writing about. And while I won’t use the word “best”, I will rank it up there with my other two favorites from the last several years: Earfood by Roy Hargrove and Pilgrimage by Michael Brecker.

Three Stories is a showcase of not only the talent of Eldar, but also his versatility and how much he has grown in his young career. Talented at playing both jazz and classical, Eldar shows his skills by featuring both genres on this album.

I must confess, when I received the CD I immediately skipped ahead to track 13, where Eldar takes on George Gershwin’s “Rhapsody in Blue”. There was something that told me that I had to listen to this track first. I was glad I did. The track was 15 minutes of mind-blowing solo piano, where Eldar manages to incorporate his own style while still staying very true to the original song.

In fact, the entire album makes up the first solo piano release for Eldar, and as I mentioned before, show significant growth. While on previous albums, Eldar shows off blazing speed as the highlight of his talents, Three Stories showcases a sense of touch and feel, and a thorough comprehension of the original compositions.

That comprehension allowed Eldar to interpret classical and jazz compositions and reconstruct them in his own style. His creativity is shown throughout the album by putting his twist on Bach, and taking something like Monk’s In Walked Bud and reconstructing it in 5/4 time.

Eldar also branches out by taking on Dave Matthews’ So Damn Lucky, but the highlight of the album remains Rhapsody in Blue, which I have listened to over and over since receiving the album.

A “great album” can be a phrase thrown around a bit too much, especially when it is really an album with a great song or two. Eldar’s Three Stories is something that can be listened to throughout. It will offer the listener, at the very least, something that can be appreciated for the skill level displayed alone. The variety, arrangements, and emotion are enough to make it a favorite in your personal collection.

One Reply to “Album Review: “Three Stories” by Eldar”