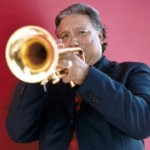 When I sit down this Friday with trumpet virtuoso Arturo Sandoval for a KPLU studio session, look for me to get inspired all over again.

In the fall of 1997, I entered my freshman year in college. One of the primary reasons I chose the university that I went to was because of its outstanding music school, and I was, at least for a few minutes, a very confident jazz trumpeter.

I prided myself on being able to play very high notes in high school, will little regard to tone or accuracy. I was sure that if that level of playing landed me a lead chair in my high school band, that at the very least I would land some chair, any chair, in the top band at the university.

Fast forward one week, and you would have found me three days in to practicing my audition music. I made the mistake of using the practice rooms in the music building my first day, where I heard the trumpet players that landed a full music scholarship effortlessly breezing through their audition music, and I decided that perhaps it would be best to practice in the dorm. At least that way I could struggle in an environment of non-musicians. By this third day, things hadn’t sounded any better, and my audition was approaching.

As it turned out, there was another freshman trumpet player living in my dorm, right down the hall. And as it turned out, he could hear me playing…and struggling. He knocked on the door, introduced himself (Matt Parker was his name), and asked how I was doing.

“Doesn’t it seem the the tempo we are required to play Birdlike at for our audition is faster than Freddie Hubbard’s original recording?” I asked. “Um, no. I think our audition tempo is actually a bit slower”, he replied kindly.

He saw the look of discouragement on my face, and said “Hold on. I’ve got just the thing for you.”

He went back to his dorm room and returned with a CD in his hand. “Track 4”, he said.

I put the CD in, and heard something that I had literally never heard before. The song was A Mis Abuelos by trumpeter Arturo Sandoval, and it was as if in 5 minutes and 25 seconds, Sandoval had managed to record a song with literally everything a trumpet player ever wanted to do in it. A slow beginning that showed off some of the best tone I had ever heard.

Once the song picked up speed, so did Sandoval. Lightening fast fingers, unbelievable range that didn’t compromise the tone, and intense energy. Trumpeter and former Tonight Show bandleader Doc Severinsen is quoted as saying “Who in the hell is this guy?” after hearing him play.

The song ended on one of the most ridiculously high notes I had ever heard, I looked at Matt awestruck. I couldn’t say anything, but he understood what I was feeling. He politely picked my jaw up off of the floor for me and told me I could keep the CD as long as I needed to.

While my audition didn’t end up going so great, I still ended up making one of the bands, and had brand new inspiration from Arturo Sandoval. I was given the belief as a musician that there wasn’t a wall that couldn’t be broken through, and that legitimate, painstaking practice could lead to great things. Every time I needed a kick in the pants to get motivated, I would put on A Mis Abuelos. I moved back to Seattle after college and have seen Sandoval just about every time he has performed in town. I would bring friends who didn’t even like jazz to the show, and their minds would be blown watching this man play.

This Friday (1/13 at 12:15 PM PST), I get the opportunity to host Sandoval for a studio session here at KPLU. He’ll be sitting feet from me, performing live on the air, and answering my questions. While my trumpet has collected a little dust over the last few years as my priorities have shifted from playing jazz to listening, reading, and writing about it, I have the feeling that watching this virtuoso up close and personal could be what it takes to inspire me all over again.