“I very much believe in a collaborative environment, and trying to get a real band where everyone has an equal say in writing the music, arranging the music and shaping the music. That’s always been a real priority for me.” – Skerik 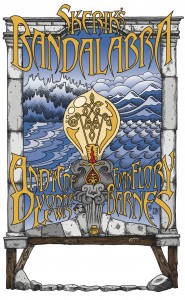 I had the opportunity to speak to saxophonist Skerik by phone this afternoon, on the day of his new release Skerik’s Bandalabra: Live at the Royal Room (Royal Potato Family). In this interview, Skerik talks about his early influences, some common elements to the eclectic bands that he has formed and been a part of.  He also covers the importance of being a part of a band versus a leader and Kenny G.

Skerik attended Mercer Island High School and went to as many live jazz shows as he could at a young age. After being introduced to the likes of Wayne Shorter and Jaco Pastorius, his eyes were opened to the possibilities of combining a range of elements in music.

“I just didn’t have any idea that you could combine those elements to get those effects. Combining Jimi Hendrix with Duke Ellington … I just hadn’t conceived of it. It was a pretty mind-blowing time.”

Additionally, Skerik explained that he also spent a lot of time listening to symphonic and orchestral music, contributing to an early love of art.

Skerik has been a part of or formed many bands (Critter Buggin’, Garage A Trois, and Skerik’s Symcopated Septet, to name a few). More recent projects include The Dead Kenny G’s and Skerik’s Bandalabra.

He told me that one of the main elements in all of these bands was rhythm. He said that they have all spent time investigating rhythmic structures and studying rhythmic music from all over the world, including India, Africa and Eastern Europe.

While talking about this, Skerik used the word “we” and “my friends,” and it made me ask him about the importance of playing music with friends. He told me that because of what it takes to make this kind of music, it’s important to have a strong connection to the musicians.

“I’ve always turned down the solo career. I’m always more interested in the power of ‘sum of the parts.’ I’m a socialist at heart.”

The name of the band suggests a lot, but I decided to ask Skerik where it came from anyway. He said a friend came up with it, and he immediately jumped on it, starting the band the very next day.

He also thought it was “such an important concept in the battle against smooth jazz.” I asked him if Kenny G was aware if the band existed yet or not:

“I don’t know. I think what happens when you have that much money is that this natural form of insulation kind of happens around your senses. And I think you just kind of get numb to the outside world. You’re just so far from it, like Mitt Romney, who displays on a regular basis just how distant you are from the surface of the earth, and the inhabitants thereof as a terrestrial being. He (Kenny G) has either just laughed at it, or his lawyer has asked if he wants to do something about it and they decided that it would just help them (The Dead Kenny G’s) more than hurt them ... but we try not to think about him too much. It’s so painful. His music is very painful.”

He goes on to say that it ended up being a great band name because of his love for the band The Dead Kennedys, and the era of 80’s punk rock where music was very politically informed. He suggests that today, comedians are the ones carrying the torch of political social comment, and that it is one of his goals to bring that back into music.

The Dead Kenny G’s most recent album suggests that, titled Operation Long Leash, and Skerik told me that there is a great story behind that title about modern art being used by the CIA as a “weapon,” which can be read here.

Skerik’s most recent project includes working with Seattle musicians Andy Coe (electric guitar), Evan Flory-Barnes (upright bass), and Donne Lewis (drums), making up the band Skerik’s Bandalabra. Skerik explains that it is a change of pace from the rock bands since a lot of the music is created in the moment.

“I was trying to put together something that was more groove oriented and was something people could dance to, but interesting and not just a funk band. There is no shortage of average funk bands out there.“

The live recording, Skerik’s Bandalabra: Live at the Royal Room was released this week and is available for digital download at Royal Potato Family. Listeners can also purchase a CD version of the album at their upcoming show on Friday, March 16th at the Olympia Ballroom in Olympia or the show on Saturday, March 17th at the Nectar Lounge in Seattle.