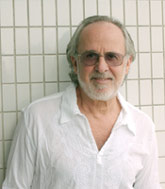 Crossover jazz musician Bob James has made a decent living from successful commercial releases, including big selling albums working with the likes of Earl Klugh and David Sanborn. But an extremely successful branch of his career comes from his ongoing popularity with many of the top rap artists in the business.

The music of James is hardly a new attraction to rappers. The trend started with rappers as early as Grandmaster Flash and DJ Jazzy Jeff & the Fresh Prince.

Since then, rappers like Run-DMC, LL Cool J, Warren G and Jamie Foxx went on to sample the music of Bob James, and most recently big name rappers like Jay-Z, Guru, Consequence and Busta Rhymes have used his samples (Jay-Z also used Nautilus in his huge hit, 99 Problems).

Perhaps his success with hip-hop artists was the inspiration for his unique trio project featuring Bob on keyboards, Dave McMurray on sax and DJ Rob Swift on turntables. The trio called BJ McSwift, featured heavy elements of hip-hop.

Here is a short list of some songs that rappers used samples from Bob James songs in: