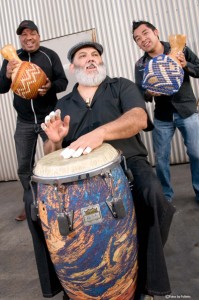 “This year’s exceptional group of honorees not only beautifully represent our diverse music communities but exemplify the meaning of being a true pioneer of one’s craft as well as being internationally recognized within their respective musical genres. We continue the privilege of honoring and celebrating these iconic individuals whose contributions and accomplishments continue to leave an indelible legacy in the world of Latin music and will continue to inspire future generations of musicians and music fans for many years.” – Gabriel Abaroa Jr., President/CEO of The Latin Recording Academy

Lifetime Achievement Awards: This Special Award is presented by vote of The Latin Recording Academy’s Trustees to performers who have made creative contributions of outstanding artistic significance to the field of recording during their careers. Influenced by Latin jazz greats Dizzy Gillespie and Chano Pozo, Mexican-American conguero, Latin jazz bandleader and salsa singer Poncho Sánchez is considered one of the top percussionists of all time. Self-taught at a young age to play guitar, flute, drums, and timbales, it was the congas that captured his heart. In 1975 he quickly became a member of famed vibraphonist Cal Tjader’s ensemble until 1982. His career has lasted more than three decades and includes more than 30 albums, numerous musical collaborations and a GRAMMY for Best Latin Jazz Performance in 1999. His self-described rhythmic style blends the harmonic sophistication of jazz with American standards and the flavor of Latin American music. Ever the consummate artist, he continues performing in concert halls and local jazz festivals throughout the world.

To read the complete release by the Latin Recording Academy, visit their website by clicking here.