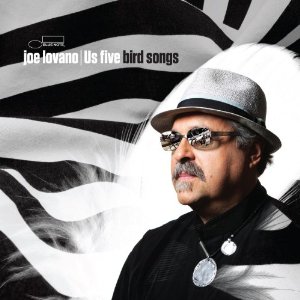 “I didn’t approach this as a tribute record,” states Joe Lovano, dispelling right off the bat any preconception that his new album Bird Songs–an exploration of the Charlie Parker songbook–is a mere retread. Lovano’s 22nd album for Blue Note Records (the release of which will mark his 20th year on the label) breaks the mold of Bird tribute records. Bird Songs is a thrillingly adventurous, thoroughly modern, and uniquely personal look at one of the most influential figures in jazz history by one of the most important voices in the music today. Us Five turned out to be the perfect vehicle for his exploration. Lovano’s dynamic young band–which features drummers Otis Brown III and Francisco Mela, bassist Esperanza Spalding, and pianist James Weidman–has been captivating audiences around the world for several years now. Their debut recording–2009’s Folk Art–was a wide-ranging set of Lovano’s original compositions that resulted in Us Five being awarded Best Small Ensemble of the Year at the 2010 JJA Jazz Awards and winning the Best Jazz Group of the Year category in the 2010 DownBeat Critics Poll. Lovano completed a double-triple of awards by also winning the JJA’s Musician and Tenor Saxophonist of the Year, and DownBeat’s Jazz Artist and Tenor Saxophonist of the Year. “Putting this recording together I kept wondering how Bird would have developed within these tunes, not just as the incredible soloist that he was but as an arranger and band leader. From what we know about him it is clear that he was into the world of music beyond so called Jazz and Be Bop and I’m sure we would have all been surprised at every turn in his approach just as we were with Miles, Coltrane, Rollins and Coleman, four of his most distinguished and celebrated disciples. At the young age of 34 Charlie Parker passed and left us with all of these questions about what would be. This recording is my humble attempt to answer some of those questions in my own way.” 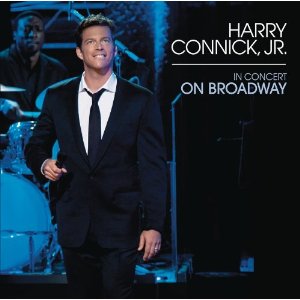 After a critically acclaimed, 15 day sold-out run on Broadway comes the release of HARRY CONNICK, JR. IN CONCERT ON BROADWAY. The show left critics raving and fans cheering.

Over the past two decades, Harry Connick, Jr. has proven to be among the world’s most successful and multi-talented artists. Harry first reached a mass audience as a pianist, singer and bandleader, securing his place as a renaissance man and versatile entertainer. His career has been studded with awards and recognition, including several multi-platinum and gold albums; 25 million albums sold around the world; Grammy and Emmy Awards; and Tony nominations for both his work as a composer and for his lead acting role.

On the heels of a sold out summer tour across the country, Harry Connick, Jr. dazzled audiences with a two-week run on Broadway.

HARRY CONNICK, JR. IN CONCERT ON BROADWAY was filmed in hi-definition on July 30th & 31st, 2010 at the Neil Simon Theatre on Broadway in New York City. The performance is available in four configurations: DVD, CD, DVD/CD deluxe set, and Blu-ray. 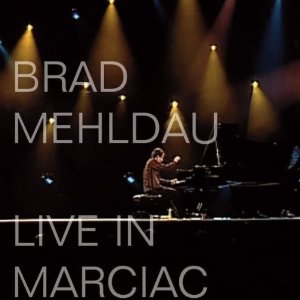 ‘Live In Marciac,’ a two CD/one DVD set, is pianist and composer Brad Mehldau’s second collection of live solo recordings, joining ‘Live In Toyko’ in his Nonesuch catalogue. This engrossing set, from a summer festival in Marciac, France, features both Mehldau originals and his ruminative explorations of material from such artists and writers as Nick Drake, Radiohead, John Lennon and Paul McCartney, and Kurt Cobain, along with American Songbook classics from Cole Porter (‘It’s All Right With Me’) and Rogers and Hammerstein (‘My Favorite Thing’).

The accompanying film offers a beautifully rendered, piano’s-eye view of Mehldau from this French performance, an extraordinarily up-close opportunity to observes his hands-and mind-at work. As London’s Telegraph has noted, ‘He’s a pianist who has it all, technically speaking, and he also has a fabulously well-stocked brain that can mingle different musical traditions. He can turn a standard with consummate musicianship and real swing, he can mine the depths of a blues chord sequence, he can summon a rock-anthem ecstasy. And lurking in the background is a fascination with classical music, revealed in the way inner parts surge and pluck at the main melody.’

The release of this live set caps a remarkable year for the pianist, who just celebrated his 40th birthday in August. Mehldau was awarded the prestigious Richard and Barbara Debs Composers Chair at Carnegie Hall for the current season, in recognition of his ‘sensuous, cerebral, and incandescent’ work. Through spring 2011, he is serving as an artist in residence at Carnegie Hall, programming concerts-including the recent live premiere of his latest original work, ‘Highway Rider’-and conducting master classes, as well as collaborating with other artists, such as mezzo soprano Anne Sofie von Otter, with whom he will perform an expanded version of his ‘Love Songs.’ This honor marks the first time the chair has been given to a jazz artist and, as New York magazine put it, ‘not just any cat-a pianist with broad influences and a cerebral style.’

‘Highway Rider,’ released on Nonesuch, has been universally acclaimed. Naming it one of the best jazz releases of 2010, NPR declared, ‘With producer Jon Brion lending a hand, Mehldau has put forth a double album of entirely original music that shows how much he’s grown as a composer, and not just a renowned pianist.’ The Los Angeles Times concurs: ‘Full of unexpected twists and lush, evocative detours, ‘Highway Rider’ is most definitely a trip, and one well worth taking.’ 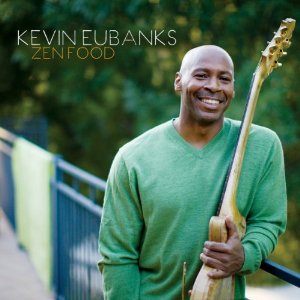 Guitarist Kevin Eubanks held one of the most coveted chairs in television for nearly 18 years as the leader of The Tonight Show Band, when his muse struck and prompted him to take his axe and move on. Kevin surely did not idle away what little free time he had during that tenure, touring everywhere in the country and world where time permitted him, plus releasing several CDs on his own imprint. Before taking the TV slot that boasted talents like Branford Marsalis and the venerated Doc Severinsen, Kevin had an acclaimed recording career spanning several labels garnering many awards and a host of followers along the way.

This release finds him in the company of his favorite players, most of whom can be found jamming with him at L.A.’s famed Baked Potato (a guitar paradise where Larry Carlton, Allan Holdsworth, Steve Lukather, Lee Ritenour, etc. have all performed). Run, don’t walk, to the nearest player and check out Spider Monkey Café, The Dirty Monk and more sizzlin six-string songs. 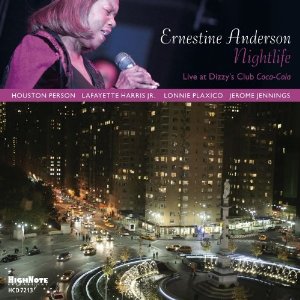 Honest-to-goodness, real-life jazz singing is almost as rare these days as a nickel cup of coffee. There are far too few remaining practitioners of the honorable art of singing good songs with the lift and the swing but Ernestine Anderson is one of those rare beings. Years of singing and living have shaped a vocalist who can make your heart cry one moment and dance the next. Poignant ballads, sassy swing, and down-home blues–Ernestine Anderson is master of them all. Recorded live at Dizzy’s Club Coca-Cola in NYC. Features Houston Person on the tenor saxophone.