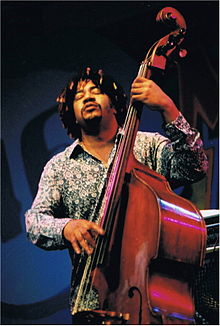 When I made the attempt to contact bassist James Genus for an interview, he wasn’t able to immediately get back to me. When he did a few days later, the voicemail he left started like this:

“Hey Kevin, it’s James Genus returning your call. Sorry I didn’t get back to you right away. I was out of the country, and when I got back I immediately had to get to the SNL (season) finale…”

Genus is a busy man, and rightly so.

In addition to being the house bassist for the Saturday Night Live television show band, he has been credited on hundreds of studio and live recordings across a wide variety of genres and is considered one of the most in-demand bassists on the scene.

When I did get a hold of him by telephone this week, we had a chance to discuss being required to learn upright bass in college, his experiences with Horace Silver and Roy Haynes in his early 20’s, what he credits for his versatility, his thoughts on the late Michael Brecker, and what it is like to be part of a television show band.

While attending Virginia Commonwealth University in the mid-eighties, James Genus was strictly playing electric bass, and was told that he would not be allowed to graduate until he also learned to play upright bass. I asked him how being forced to learn the upright bass impacted his career. He told me that he recently went back and visited the school, and met current bass students who were also struggling with the fact that they had to learn upright bass.

“I told them that it was the best thing that ever happened to me. Musically, it opened a whole other door for me and my career, because there was a whole other side of music that I wasn’t addressing, and it basically just made me a better musician all around.”

I also asked him if he thought he ever would have pursued upright bass if it hadn’t been required of him. Surprisingly, he said he didn’t think so, but couldn’t be sure.  He said that he may have developed an interest in it had he been at a school that didn’t require it, but there is a good chance that the urgency wouldn’t have been there.

Getting Hired by a Legend at 23

After finishing college, Genus was encouraged by Ellis Marsalis to head to New York, and he did. He initially started getting exposure in the city by showing up to the late night sessions at the Blue Note jazz club. By the time he was 23 years old, Genus heard about an audition for a bass player to play with the legendary Horace Silver. Genus bought at ticket to Los Angeles to go audition.

“I was just going for it. I didn’t have anything to lose. I had gone to an audio engineering school, and after I graduated found out that the starting jobs were basically at the bottom of the food chain as far as getting jobs and making money. I was already doing some gigs around town, and I just figured why not?”

Genus auditioned in the practice room of a music store, and was hired. Genus said it was not only an incredible experience being able to go tour with Silver that summer, but the spring before the tour left, he was also hired to play with the great Roy Haynes. That year proved to offer a huge amount of exposure for him, which undoubtedly opened several doors for him as his career progressed.

Of the thousands of musicians that have crossed paths with James Genus, it is apparent that he keeps a special place in his heart for saxophonist Michael Brecker, who passed away five years ago. When I asked him if the void has been filled since Brecker died, or if it ever could be filled.

“I don’t think so. I mean there are great saxophonists, and there are a lot of imitators, the same way that there were (John Coltrane) imitators. But I think (after Brecker died), things just went in a different direction. There are horn players who play it, but I don’t think that there is anybody who will ever get to the place where he was. There might be, but as of now … I don’t know.”

When I asked him to try to describe what Brecker did that was so unique, Genus chuckled, almost to suggest that it was impossible. He did say that in addition to his unique approach to melodies and an unparalleled technique, Brecker immersed himself in so many different kinds of music, and he would bring that wide range of knowledge into his performances.

Genus continued with that thought for a while, relating a knowledge of different styles to his own success. If there is one mindset that it appears Genus stands by, its having the knowledge and knowing different languages of music, even if you never have to end up playing it.

“When I came to New York, there were a lot of musicians who only did this or only did that. Not to say that is bad, but I think that being open to all kinds of music and that vocabulary can open your ears as well as doors.”

I asked Genus if he approached practicing with that mentality. He told me that when he would practice with a bunch of musicians, they would play everything, and still to this day he takes that approach. While much of his practicing might be geared towards certain projects he is taking on, he still makes sure he is staying as versatile as possible.

James Genus, in addition to all of his other work, is the bassist for the Saturday Night Live television show band. I asked him what the difference was between working for a television band versus other work. He told me that when he was offered the job, it took him some time to make the decision.

He was touring with Brecker, as well as Dave Douglas, and making a good living doing it. He said he didn’t want it to interrupt the flow of that, because he had seen it happen to other musicians before where they get caught up in that job and there ends up being no time for anything else. With SNL, however, he would have the summers off and eventually after spending time with the band, would be afforded a little more freedom to take on other projects from time to time if he chose.

Genus also said it is a totally different discipline. Most of the time, the songs can range from 30 seconds to a minute, and the band will almost never finish an entire song. It isn’t simply playing the music either that is required. With the live television show there is a lot of multitasking involved, from listening to the conductor to syncing with what happens to be going on in the show.

With all of the work that Genus has done in his career so far, he has yet to record a studio album of his own. I asked him if we will see that any time soon. Genus said he gets asked about that all the time, but he has his hesitations.

“I guess that is the curse of having so many things that I do. (How do you) focus on making a record and say that it is going to be ‘this’ but not be ‘that’? But I have been doing some writing, and it is almost to a point now where I just have to do it. It was at a point where I though maybe I didn’t have that much to say, and I didn’t want to make a record just for the sake of making it. But it is going to come soon.”

James Genus has performed or recorded with hundreds of musicians, including Horace Silver, Branford Marsalis, Herbie Hancock, Dave Douglas, Roy Haynes, Nat Adderley, Chick Corea, Michael Brecker and Lee Konitz. He is also currently the bass player for the Saturday Night Live television show band. His website is www.jamesgenus.com, and he can be followed on Twitter @jamesgenus. To hear the complete interview, click here.