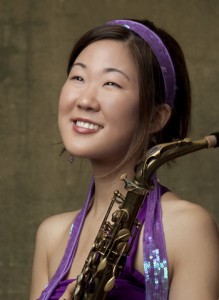 During a festival that featured a variety of fine saxophonists, 19-year old Grace Kelly might have been the most highly anticipated of the group, making her first trip to Seattle as part of the Earshot Jazz Festival.

It is clear that Grace enjoys what she is doing. Kelly performed to a sold-out crowd at Tula’s Wednesday night, with her show the following night also already booked to capacity. Performing in a quintet (with trumpet, piano, bass, and drums), Kelly projects a genuine happiness while performing.

But the crowd was treated to more than a positive stage presence. This isn’t a case of people coming to see a show based on some novelty of seeing a talented teen on stage. By the time she was 14, Kelly had already gained the attention of Wynton Marsalis, Dave Brubeck, and Phil Woods, and while her career might still be in the early stages, her playing is not.

The audience immediately became enamored with Kelly, who wasted no time bringing energy to the show with songs like Moanin’ and an uptempo version of The Way You Look Tonight. As it is often found in live performances, Kelly took this opportunity to explore some intense, upbeat improvisation often not found on studio recordings seeking out radio airplay.

“I can already tell I like this place. I was just in San Francisco, where they clapped, but they were very polite. Keep shouting and cheering. It helps us (the band) out.” – Grace Kelly addressing the crowd at Tula’s on Wednesday night.

Grace also took to singing on several occasions, featuring a couple of original compositions that seemed to have some personal background. The song Eggshells was inspired by a conversation she had where she was told by the other person that he felt like he was walking on eggshells. Another original vocal tune, Nothing to do with Me, was described simply as a “sad song”, but also seemed to have personal meaning. Here is a video of Grace singing from when she visited the KPLU studios the next day.

Grace then countered the “sad song” with her Happy Theme Song, and all seemed right in the world again. Kelly showed off her versatility with a rocking original tune called Filosophical Flying Fish, saturated heavily with a strong New Orleans foundation.

One true test to see if a fresh face musician is more than just something that is trendy is whether or not that musician can keep the attention of the audience for the entire show. The crowd never lost their enthusiasm, lined up for CD’s and autographs for the entire intermission, and eagerly anticipating the second set. Grace Kelly is the real deal.

Other saxophone highlights from the 2011 Earshot Jazz Festival

Tula’s also hosted two very notable saxophonists the previous week. Wessell “Warmdaddy” Anderson offered up a soulful performance with local all-stars Bill Anschell (piano), Phil Sparks (bass) and Devon Lewis (drums). If Anderson hadn’t mentioned that his horn had been damaged on the flight and he would need to get it repaired the next day, I doubt anyone would have noticed. “Warmdaddy” raised the temperature in the room with highlights like I Remember April and Change of Heart Blues.

Vancouver, B.C. saxophonist Cory Weeds arrived at Tula’s the following night, with a tribute to the great saxophonist Hank Mobley. Joining the trio of sax, guitar, and drums was Mike LeDonne, one of the leading Hammond B3 organists on the scene today. While at times I found it a bit difficult to hear Weeds soloing over the band, the set cooked with intense solos that escalated in energy as it was constructed. Highlights included LeDonne’s composition Perfectly Hank and Straight, No Filter.

2 Replies to “Grace Kelly blows the roof off at Earshot”