Looking to ring in the new year with some live music? There are a lot of venues around the country that have special New Year’s Eve programs lined up with some all-star musicians. Here are five shows from around the U.S. we chose to highlight, including one from Seattle.

…And stay the night for an additional $119 a night, not including tax.

Bassist extraordinaire, composer, arranger, educator, curator and administrator, Christian McBride, has been one of the most important and most omnipresent figures in the jazz world for 20 years. Sometimes hard to believe considering this man is not yet 40. 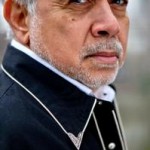 In a career spanning five decades, pianist Monty Alexander has built a reputation exploring the worlds of American jazz, popular song, and the music of his native Jamaica, finding in each a sincere spirit of musical expression. In the process, he has performed and recorded with artists from every corner of the musical universe: Frank Sinatra, Ray Brown, Dizzy Gillespie, Sonny Rollins, Clark Terry, Quincy Jones, Ernest Ranglin, Barbara Hendricks, Sly & Robbie Shakespeare, among many others.

2) The “Ring in The New Year” Package includes admission to the second show, choice of dessert, coffee or tea, party favors and includes tax & tip. Doors at 10:30 PM and music starts at 11PM. $80.50 per person