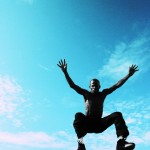 James Demaria, photographer, filmmaker and soul searcher, became friends with trumpeter Kermit Ruffins about 5 years ago. They decided to try to make a film about Kermit’s musical upbringing in New Orleans’ Treme neighborhood.  James went down to New Orleans in 2009 with a camera crew and started trailing Kermit from place to place. And what started out as a film about a jazz musician turned into something else.

Treme Life turned into a love letter to New Orleans.

“Native New Orleanians are people you can never forget. Once they start talking to you it’s like being with someone you love. Even if you just met.”

New Orleans, and the Treme neighborhood in particular, is the cradle of the unique culture of music and food and joy that couldn’t have happened anywhere else in the world.

Demaria has crafted a stylish, informative and touching documentary, which features: 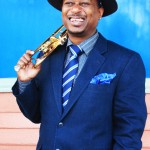 Trumpeter Kermit Ruffins, the “feel-good ambassador.”  For Kermit, it’s all about music, barbecue and having a good time – New Orleans style. He speaks with concern about post-Katrina changes in the city that are causing its residents to lose touch with the history and traditions of the Treme.

Dancing Man 504 (Darryl Young), a second-line dancer who has taken it upon himself to spread the tradition of second-line as a step in healing the damaged city.  As he says, New Orleans “… needed to be more than rebuilt, she needed to be enjoyed!” 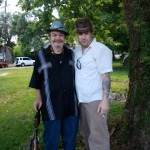 Comments from such New Orleans stalwarts as Dr. John, Rev. Goat Carson, Ken “Afro” Williams and the truly delightful Lolet Boutte all contribute to a picture of an irreplaceable community.

The filmmaker even takes some New Orleans culture home to New York, with a funeral parade for Coney Island, and a second-line over the Brooklyn Bridge. A visit to the Louis Armstrong House museum in Queens with trombonist Glen David Andrews is especially moving.

He has lived in New Orleans, and now is a frequent visitor, calling it:

“A place to feel at home. A place to take a rest and recharge. A place to bask in the warmth and kindness of some of the most terrific folk on God’s green Earth.”

If you’ve been there, you know how true that is.

Let’s all do what we can to keep it that way.

DVDs will be available at some time in the future.

More information about the film and James Demaria’s work here:

One Reply to “Film review: ‘Treme Life,’ a love letter to New Orleans”