I’ve featured a variety of great conversations between KPLU’s Nick Morrison and Kirsten Kendrick in the past, and their recent chat about Phil Woods is no exception. Here is their discussion, as part of KPLU’s Artscape series. 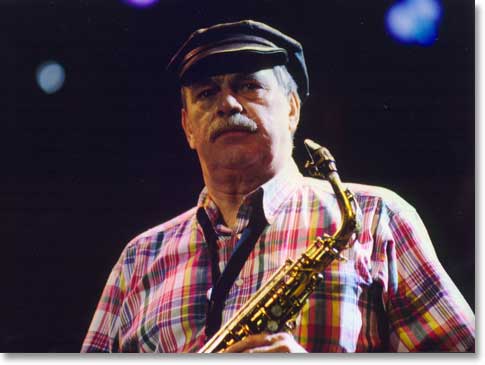 Kirsten: Nick, some people may not know Phil Woods’ name, but chances are they’ve heard him play before.

Nick: Well, yes. Phil Woods, like many jazz musicians, throughout his career did a lot of film work. He did a lot of studio work. He performed with Paul Simon on the song “Have a Good Time.” He did the wonderful sax solo on Steely Dan’s “Dr. Wu.” And, of course, his SOLO shot heard round the world was the saxophone solo on Billy Joel’s “Just the Way You Are.”

Kirsten: But Phil Woods has been around for a while. He was one of the early Bebop saxophonists. And, at the time, Charlie Parker was still very much on the scene. How did this factor into his career path?

Kirsten: Wow! He just takes off there! And that could pretty much be said for his career. He just took off!

Nick: Yeah. And, I think he pulled off a pretty neat trick because, throughout his career right up till now – he’s still playing great – he’s always been this major force in Bebop but it never feels like he’s stuck in the past. It always seems like he’s moving forward. And I think one of the styles of music in which you can best hear that is when he plays a ballad. I think that he is one of the very best ballad players in jazz. There’s nobody who gets a more beautiful tone on the alto and is more expressive in a ballad than Phil Woods. And in 1973, he started a quintet that still goes to this day. It has some revolving members in the front line but it’s basically Phil Woods with bassist Steve Gilmore and drummer Bill Goodwin. And they’ve had a variety of trumpet players and piano players but this piece that we’re going to hear now features trumpeter Tom Harrell and pianist Hal Galper, who played with another great alto saxophone player during those times, Cannonball Adderley. This is from a CD called “Gratitude” and it’s called “Time’s Mirror” and Woods just soars on this one.

Kirsten: In addition to his quintet, Phil Woods is also known for his Little Big Band.

Nick: Yeah. And we have an example of that on our list as well. Back in 1957, Quincy Jones put out an album called “This Is How I Feel About Jazz.” Phil Woods was on that release. And later on, in 2004, he kind of returned the favor to Quincy by doing a CD of Quincy Jones compositions called “This Is How I Feel About Quincy.” And it was basically his quintet again with Brian Lynch on trumpet this time and Bill Charlap on piano rounded out with more horns. And this is the L ittle Big Band doing Quincy’s “Stockholm Sweetnin.'”

Stockholm Sweetnin’ – Phil Woods – This Is How I Feel About Quincy

Kirsten: Nick, let’s end this tribute to Phil Woods in his birthday month with what you like about him.

Nick: Well, I guess you could just say I love his sound. It seems a little bit weird but in all the time that I have been listening to jazz, there are really only four alto saxophonists that I can tell that I am listening to when I am listening to them. You know what I mean? I can identify their sound without knowing that it’s them: Charlie Parker, Johnny Hodges, Paul Desmond and Phil Woods.

Kirsten: Nick, thanks again for coming in and giving us a little bit more music history!