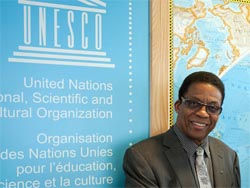 The concert will be streamed live at jazzday.com and monkinstitute.org.

The inaugural International Jazz Day will be celebrated by millions worldwide on Monday, April 30, and will begin with an all-star sunrise concert in New Orleans’ Congo Square, the birthplace of jazz and culminate with a sunset concert at the United Nations. Presented by UNESCO in partnership with the Thelonious Monk Institute of Jazz, International Jazz Day will encourage and highlight intercultural dialogue and understanding through jazz, America’s greatest contribution to the world of music.

The sunrise concert from Congo Square is open to the public and begins at 7am (8am EDT), and will be video streamed live at Jazz Day and Thelonious Monk Institute of Jazz.

Students and schools from around the world are invited to join in the celebration of International Jazz Day and play “Watermelon Man” along with Herbie Hancock live from Congo Square, New Orleans at 8:15am EDT on April 30, 2012. Sheet music and an MP3 is available to download on JazzDay.com. Performers are encouraged to video record their performances of “Watermelon Man” and upload them to youtube.com and title them:International Jazz Day – Watermelon Man.

The concert at the United Nations General Assembly Hall begins at 7:30pm EDT and will be video streamed live at Jazz Dayand Thelonious Monk Institute of JazzIn addition to viewing the concerts from Paris, New Orleans and New York at JazzDay.com, JazzCorner.com created JazzDay.com as an informational portal for jazz education resources and the site where musicians can inform and show the world their jazz events and educational activities on April 30th. There are instructions and forms located on the site. After April 30th, hundreds of videos will be on display on JazzDay.com.