One of the great things about working with the music staff at KPLU is that each member of the staff has their own unique interests and backgrounds in music, resulting in a wide variety of stories and interests. This one comes from KPLU’s Production Manager Nick Morrison. Enjoy! 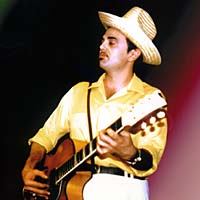 Back in about 2001, when I was KPLU Music Director, I received a sketchy-looking CD out of nowhere by ‘Little George Sueref And The Blue Stars.’  It didn’t look very promising but, heck, it was my job to check it out.  So I put it on and this guy’s voice blew me away.

Little George was of Greek origin born in in the UK, sounding like some old-school American soul singer.  So I started checking around and found the name of a guy in California who was a fan of George’s and was bringing him to The States for a little tour….which happened to include one of the late-morning/early afternoon slots at the Bumbershoot Blues Stage.  So we decided to hook up there.  Not many people heard Little George that day but he was sublime.  And a nice dude. I put him in touch with a friend of mine in New York who tried to get him signed to a major record label but that eventually fell through.  (And I think it fell through because George didn’t want the complications.)

Anyway, George and I stayed in touch via email for a while.  In the last message I got from him, he told me he’d been on his way to a gig somewhere in London that day but had to pull over to the side of the road to put out a fire in the engine compartment of his car.  He put it out with his lucky hat.  Which, of course, ruined the hat….and since he doesn’t play without a hat on, he just turned around and went home. As I say…last I ever heard from him.  And no follow-up recordings, either.

So, last night I got a call from the guy in New York, who I’d also fallen out of touch with and he reminded me of our Little George adventure years ago.  He later followed up the phone call with this video.  After extensive websearching, neither of us could come up with any information about what George is up to … or even if he’s still among us.

Little George:  Just another one of the many great musicians out there who hardly anyone will ever hear of but who carry the spirit like it should be carried.

3 Replies to “A Blues Interlude, By Nick Morrison”